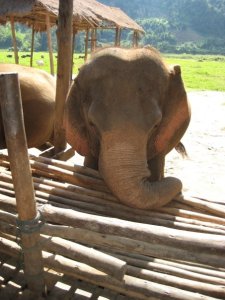 Several years ago I travelled to Thailand and while there spent a day at the Elephant Nature Park. This park houses several dozen elephants that have been injured in their work in the logging industry in Thailand. Some have broken hips, others are blind – while there we fed the elephants, bathed them and learned their stories. (Check out Elephant Nature Park and the stories of their elephants – especially Jokia) The experience was like nothing I had ever had before.  Despite the horrors happening now I do need to tell you that the Thai people (most of them) are beautiful, loving people.

Last night I learned, through my Twitter feed, that the the ENP had been raided by the Department of Natural Parks (DNP) and Lek, the woman behind this amazing cause, was threatened with jail time. As I followed links throughout several sites I learned that the Wildlife Friends Foundation Thailand (WFFT) was also raided. While ENP did not loose any animals, WFFT had many confiscated. As the DNP went throughout the park, they did so with disregard for the animals health and safety. This video (let me warn you that it is traumatic for anyone who is an animal lover) upset me to tears and kept me up last night. It is of a poor macaque that was knocked unconscious during his capture being shoved in a cage without any medical care.

I wish I could do more to help the animals over in Thailand but the first thing I know I could do was share their story and ask that you sign the petition that will ultimately go to the King in hopes of stopping the raids by the DNP.  In addition to signing the petition, please share this story in hopes that these animals that had already suffered in their lives are left alone, along with the great people who have worked so hard to save them and keep them happy and healthy.

1 thought on “Shocking treatment of rescued animals in Thailand”